Aer Lingus has announced that it has increased capacity on the Dublin to London Gatwick route by 56%, with the carrier adding two additional daily rotations for a total of six daily rotations which commenced on the 19th of October (Aer Lingus website), with new early morning departures at both ends of the route, providing higher frequency with a wider range of timings, which will be particularly attractive to business traffic.

The increased London Gatwick route capacity increase is consistent with its demand-lead strategy, as the carrier re-deploys capacity from Southern Europe to Northern Europe (Investor Day Conference Call 28th of September), where their is an increased business traffic mix.

Aer Lingus has been winning back market share in the key London market with the carrier having market share of 45% in 2010 up from 39% in 2009 (Flying in Ireland April 2011), having product differential in the market with roll out of new fare pricing structure, participation in GDS, seat selection and mobile phone check-in option.

The roll out of the Economy Flex a quasi business class product allowing customers re-book flights which offers flexibility ,together with the roll out of the pre-order hot meals in 2012 (Investor Day Conference Call 28th of September), will be particularly attractive to business traffic on routes such as Gatwick.

The increased frequency on the London Gatwick route will be attractive offering increased connecting opportunities to partners British Airways and Virgin Atlantic.

With the Aer Lingus policy of commercial neutrality it will be particularly interesting to see how it will develop at London Gatwick in relation to new partnerships in due course, where the carrier could gain potential connectivity to the Asia market, or alternatively passengers could book through point to point.

On the 8th of September Emirates Airlines announced that it was launching a new route from it’s Dubai Base to Dublin commencing on the 9th of January 2012 operating daily using an Airbus A330-200, becoming the 29th European City on its route network (Emirates Airlines).

On the 21st of September the carrier announced that it was seek to fill 17 job positions at its new Dublin station being set up, including cargo and passenger roles (ITTN), the carrier was looking at options to serve the IT package market (ITTN).

It was citied by Routes online (8th of September) that the 54,000 Origin & Destination passengers travel annually between Ireland and the UAE, with 10% of this market currently flying via Emirates Airlines UK routes, the carrier could potentially capture O&D traffic connecting via European Hubs.

On the Breakfast Business Show with Ian Guider on Newstalk 106-108FM (Thursday 20th October). The Emirates Airlines VP UK & Ireland Laurie Berryman stated when the new Dublin route matures in 2 to 3 years time, it plans to increase capacity from an Airbus A330-200 to Boeing 777.

The VP stated 'Never say Never' to using the A380 on Dublin route, with 19 of 90 A380s on order delivered, it held discussions with Dublin Airport Authority on type using Terminal 2. Emirates Airlines has a policy of increasing aircraft size rather than increasing frequency (Business Travel News).

The carrier continues to build its brand profile in Ireland with the carrier holding four open recruitment days in Cork, Dublin, Galway and Limerick starting next week, as it has requirement for 4,000 cabin crew in the current financial year.

The Emirates Airlines VP UK & Ireland Laurie Berryman stated “Our policy has always been to recruit staff from countries where there is a strong hospitality tradition” (Business & Leadership).

Interestingly Emirates Airlines started a Dubai to Manchester route in 1985 using Airbus A310 on an daily service, and over the years has increased the route in terms of capacity and frequency with the carrier now operating three times daily using A330, B777-300 and A380.

An exciting future is ahead for Emirates Airlines as it develops it’s new Dublin route where the carrier sees significant potential.

Lufthansa is to expand its route network into for summer 2012 with the carrier launching two new routes from its Düsseldorf Base to and , in addition to restoring its seasonal to route. The German consumer confidence is strong, on the back of economy growth of 3.6% (Tourism ) which is driving demand for air travel.

The new Lufthansa Ireland West Knock route will carry 2,000 passengers generating €1 million in revenues, annually over 200,000 Germans visit the West of Ireland, with confident that Lufthansa will continue to grow its operation beyond 2012 with increased capacity and new routes (Anna.Aero).

Germanwings is to increase capacity by 25% on the Cologne/Bonn to Dublin route for summer 2012 increasing frequency from three to four flights weekly (Germanwings).

The German market is the third largest travel market inbound with 380,000 German tourists visiting Ireland in 2010 (Irish Times June 2011), generating €160 million in revenues on all Ireland basis (Tourism Ireland), with German tourist numbers up 15% in the first half alone, indicating there is significant potential in the market, with Aer Lingus having launched a new route to Stuttgart this summer, and extended the operation of its Hamburg route to all year round, to capture the inbound growth opportunities from the German market.


Effective: 6th May till 26th September
Operated by Eurowings CRJ900

Effective: 6th May to 29th September
Operated by CRJ900

Effective: 7th April to 6th of October
Operated by A320

I enclose a link to a recent Anna.aero article: Knock gets weekly Düsseldorf service next summer; – market trebled between 2002 and 2008 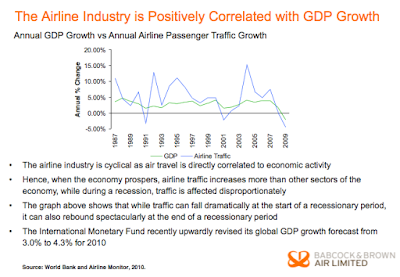 Air Travel will play a crucial role in the recovery of the Irish economy playing a valuable role to drive inward Foreign Direct Investment, and enabling Irish companies to grow export markets, with the economic expected to grow by 1.8% in 2012 (Irish Central Bank) .

It was citied in the research of Ishutkina that between 1985 and 2005 the average growth rate of the airline sector in Ireland was 17.1% ,almost triple the GDP rate of 6.1%, as a result of EU liberalization packages opening up the market.

Therefore the key to unlocking the growth of the aviation sector will be further liberalization of the market by creating a competitive cost environment with airport infrastructure, and expanding open skies agreements.

The air transport sector is a key connectivity tool enabling movement of capital, knowledge, opportunity, people, resources and skills; it impacts on the economy directing creating jobs and indirectly i.e. for every 1 million passengers through airport 1,000 jobs are created in the economy (ACI).

Ireland must create new traffic flows for labour, investment and tourism, as the industry makes a significant contribution to the economy through wages, profits, tax and Vat receipts and supports further jobs through the valued added supply chain.

It is clear that air travel demand is driven by economic growth and that it is highly leveraged to the economic cycle, expanding and contracting at roughly twice the rate of the overall economy (IATA).

This fact has been bourne out with the Dublin Airport Authority stating Dublin Airport traffic was up 4% in the first nine months to August, with economic growth of 1.6% expected for 2011, the traffic growth bears out the GDP/Traffic relationship.

The Minister of Transport Leo Varadkar is to due to make a decision of the future of the Dublin Airport Authority by the end of the year (Cork Independent), in early September he stated the ownership of Cork, Dublin and Shannon under the Dublin Airport Authority was "not tenable" (Irish Times), recognizing airport costs are key part of recovery strategy to restore competitiveness to stimulate the tourism industry, the review of the €3 air travel tax next spring is to be welcomed.

It was citied by the World Travel and Tourism Council tourism in Ireland makes a contribution of 6% of GDP €1.9 Billion to exchequer supporting 106,000 jobs.

On Friday 14th of October it was announced that Tourism Ireland is to collobrate with an number of airlines including Aer Arann, Aer Lingus, Etithad Airways, Emirates Airlines and US Airways to stimulate the inbound tourism market using a portion of revenue from the Air Travel Tax for joint marketing promotions.

The indications for 2012 are bright with Emirates Airlines to launch a new daily service from Dubai to Dublin commencing on the 9th of January 2012 enabling access to Emirates Airlines growing route network, and Lufthansa is to commence a weekly service from Dusseldorf to Ireland West Knock Airport for the summer season, and Ryanair has announced that it will launch three new routes into Ireland West Knock Airport for summer 2012.

The Aer Lingus Regional operation continues to grow strongly with passenger numbers up 45% to 71,000 passengers, as usual the figures excludes the United Airlines Joint Venture route from Washington Dulles to Madrid. It has been reported the frequency on the route will be reduced to four times weekly for the winter schedule.

The Ryanair CEO Michael O’Leary recently stated the carrier plans to grow its Oslo Rygge Base from 1.5m to 2 million passengers in 2012, with the carrier expected to announce new routes early in 2012.

It was reported on the 3rd of October that Ryanair is negotiations with Ljubljana Airport and Tourism Authority, to launch a new route from Dublin to Ljubljan, while the carrier stated it plans to double its flights into Ireland West Knock Airport for summer 2012.