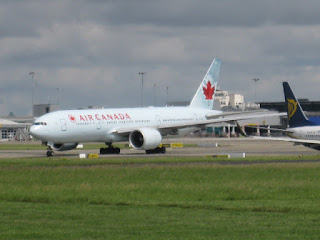 Air Canada has been using the ultra-long range Boeing 777-200LR's into Dublin since last Tuesday 2nd of August covering maintenance on Boeing 767-300ER’s tasked to the route. The Air Canada B777-200LR normally operate routes to Asia/Australia including Beijing, Hong Kong , Shanghai and Sydney. It is a welcome change to see the Boeing 777 operating the route.

The Boeing 777 is an irregular visitor to Dublin Airport on scheduled passenger services. The type is a rare visitor to Dublin, being occasionally used by Air France on Rugby charter flights and Etihad Airways on very specific mission flights, with the carrier using a Boeing 777-300ER to clear the backlog post the Ash Cloud in May 2010 and on the 7th of July 2011 on a substitution for an A330-200 being tasked to Manchester, with A6-EYE in Manchester City Colours for an promotional visit.