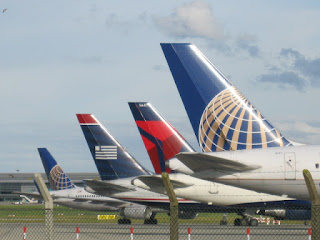 The Hurricane Irene's move up the US East Coast at the weekend after making landfall in North Carolina lead to the closure of hubs in Boston and New York region throwing the operation of airlines out of sync, this lead to US Carriers operating normal east bound flights on Saturday morning.


On Sunday morning Terminal 2 was airily quiet due to the cancellation of Aer Lingus Transatlantic flights to Boston and New York JFK and all US airlines arrivals from the East Coast where cancelled, with US Airways AWE722 N249AU Boeing 767-201ER c/n 23901 arrived from Philadelphia with the B767 joining the B757s parked on the west apron as the west bound was cancelled. 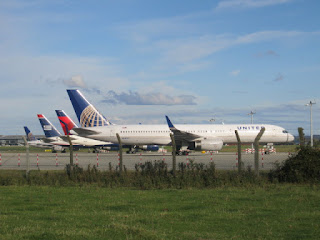 Aer Lingus used the opportunity to utilize the spare A330s, using EI-DUO A330-202 to operate the EIN164/5 to and from London Heathrow.

United Airlines and Continental Airlines are preparing to resume flight departures at noon at its hub at Newark Liberty International Airport, while Aer Lingus resumed normal flight schedule to the US. It will take a number of days for the hubs to resume normal operations as aircraft and crews are out of sync, before the full schedule can resume.

The Hurricane Irene demonstrates the effects of nature can have on the global transport system, with commerce now globalized, with the New York airports being an intergal part of the global aviation system, with Continental United Airlines (Newark Liberty) in the Star Alliance and Delta Airlines (New York JFK) in the Skyteam Alliance.

There was a total of 10,000 flights cancelled, with an economic cost to the airlines and their customers alike, and to the global supply chain, with New York airports being key hubs.