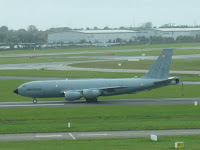 The French Air Force “Armée de l'Air” have a long connection with Ireland being regular visitors for rugby matches and Training/VIP flights using a variety of aircraft types, mostly interestingly over the last two years with Boeing C-135FR’s which undertake multi-sector mission training across Europe, making Dublin one of the R&R stops. The C-135FR’s Stratotankers are under the command of the Strategic Air Command called ‘CFAS’ based at Istres, in 2004 this unit was renamed 93 "Bretagne" (GRV 93 or Flight Refuelling Group 93) operating a total of 14 units which have both fuelling and transport capability, enhancing their operational flexibility. The unit purchased 11 aircraft directly from Boeing and three second-generation USAF KC-135R’s in the late 1990s. The 93 "Bretagne" Group further enhanced the operational flexibility of the aircraft in 2008 through the development of “Morphe
Post a Comment
Read more
More posts