The consumer will be the ultimate winner this winter as three airlines (Aer Lingus, Norwegian Air Shuttle, SAS Airlines) compete for market share on the to route as Aer Lingus returns to the route with a daily A320 service from the 28th of October. 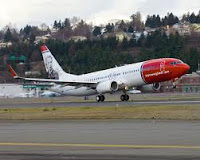 This will mark the fourth return to the route for Aer Lingus (2001, 2004, 2007), in addition to existing services on the route from Norwegian Air Shuttle operating twice weekly and SAS Airlines operating thirteen times weekly.

Aer Lingus has been developing its brand presence in the Scandinavian & Nordic markets having launched a seasonal summer route to  in March 2010 and route for summer 2012, however in an interesting development the airline has extended the Stockholm route to a year round operation & will offer flight connections to Boston & New York JFK over it's Dublin Terminal 2 hub

Interesting times are ahead in the Dublin-Scandinavian & Nordic markets segment as it continues to evolve against the backdrop of a significantly challenging competitive & economic environment.