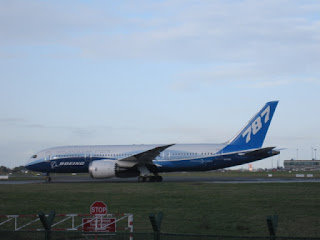 The Boeing 787 Dreamliner made its first official visit to Ireland when N787BX Boeing 787-86Q c/n 40692 Boeing Company using call sign ‘Boeing 787’  touched down at Dublin Airport at 2030 hours on the 25th of January as part of the second segment of the Dream Tour.


The tremendous enthusiasm was witnessed at Airport as many people made the trip to the airport to witness the arrival and the departure, many airport staff toured the aircraft in the hangar.

The aircraft was parked on stand 86R on the North West end of Pier D on arrival before being towed to Hangar 6 where it would remain for the duration of its stay, show casing the aircraft to delegates from the Air Finance Conference.

The Dream Tour saw the aircraft visit Wichita on the 20-23rd to visit Boeing 787 partner Spirit AeroSystems and Boeing employees and on the 23rd to the 25th to visit Hamilton Sunstrand, then to Dublin in visit airline customers, financiers, leasing companies and other stakeholders to coincide with the 14th Annual Air Finance Conference in the Four Seasons Hotel. The next stop on the tour after Dublin was

The Boeing 787 Dreamliner has been a regular visit to having made transit stops in Shannon en route from Air Shows in Europe returning to its base, with the first visit having taken place on the 28th of July 2010. 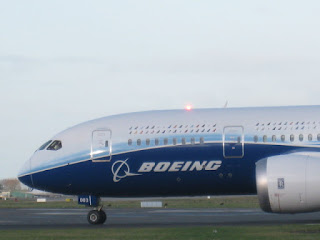 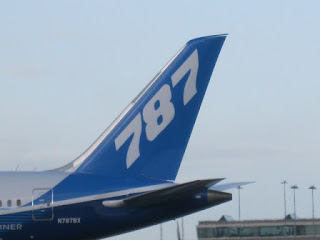 On the 12th of December Etihad Airways who operate 10 weekly services on the Abu Dhabi to Dublin route using Airbus A330-200s announced it placed an order for 10 additional Boeing 787-9s plus 25 purchase rights for a total of 41 aircraft making them the largest operator of the type in due course, as they take delivery of the aircraft between 2014-2019. The airline announced that would be one of the initial destinations for the new aircraft.

The visit coincided with a number of major developments in the Dreamliner Programme on the 21st of January as the aircraft embarked on the Dream Tour ANA Airlines introduced the type on its first long-haul commercial service between Tokyo Haneda and operating three times weekly.

ANA stated the customer satisfaction has been high with the aircraft having entered service in November on two routes with 96.3% reliability operating with a load factor of 88%, which is 12% above the average compared to other aircraft carrying 100,000 passengers since they have entered service.

On the 25th of January the aircraft made its debut in insurance programmes also with its 2011 Financial results Boeing announced that it planned to increase production of the Boeing 787 from 2.5 per month to 3.5 by Q2 and five per month by the end of the year with the new assembly line at Charlestown to be on stream for deliveries from Q2. The company stated it planned to deliver 35 to 43 Boeing 787s in 2012.

On the 27th of January the day of departure from it was announced the Dreamliner was honoured with the ‘Aircraft of Legend’ award by the Living Legends of Aviation Organization.

The Boeing VP Chief Project Engineer 787 Program Mike Sinnett stated ‘It is recognition of the expertise, skill and dedication that has gone into the creation of this airplane and an inspiration we’ll always keep in front of us-it’s something to continue to live up to’

The Boeing 787 Dreamliner has a very healthy backlog with 870 firm orders from 59 customers valued at $170 Billion, with five aircraft delivered to ANA. The year has started strong for the Dreamliner with Air France confirming an order for 25 Boeing 787-9s on the 10th of January and on the 12th of January a un-identified customer ordered 10 Boeing 787s.

Aer Lingus and Ryanair are not customers for the Boeing Dreamliner, both are currently evaluating the Boeing 737 Max which will adapt features of the Dreamliner, as fleet replacements for their A320 Family and Boeing 737-800s.

I am looking forward to the return of the Boeing 787 Dreamliner to the skies over Dublin hopefully the wait won't be too long!.

Posted by Irish Aviation Research at 15:39 No comments: Links to this post