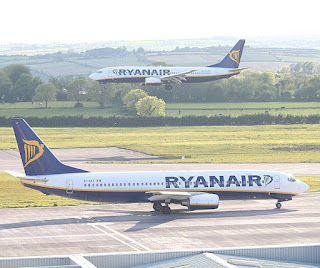 Ryanair 737s at Cork Airport: Picture Courtsey of Paul Daly   Ryanair has responded to evolving market conditions with speed through the Chief Operating Decision Maker (CODM) modelling to allocate the aircraft in terms of where it will generate the highest yield and revenue to achieve the highest rate of return rather than individual route performance, thus protecting its margins as fuel costs expected to rise by €350 million in FY2012. Ryanair announced on the 6 th of March the airline announced that it was to cease routes from its new Budapest Base to Chania, Palma , Rhodes and Trapani citing weak demand, and replace them with two new routes to Billund and Dusseldorf Weeze and increase frequency on routes to Barcelona London Stansted, Paris Beauvais (Portfilo.hu 6 th March 2012) Ryanair announced on the 2 nd of March it would not proceed with plans to base an 8 th Boeing 737-800 at Faro, with the carrier to terminate three routes to Bergamo, Marseille and Leipzig
Post a Comment
Read more
More posts