“Conor McCarthy has turned this belief on its head by growing Dublin Aerospace into a hugely successful brand in aircraft maintenance based on the premise of high quality and cost competitiveness”-Frank O’Keeffe Partner E&Y Entrepreneur of the Year.

On Tuesday the 8th of March I had the pleasure of attending the Royal Aeronautical Society Lecture by the Chairman Dublin Aerospace Conor McCarthy in Wynns Hotel Abbey, where there was a large audience in attendance to hear the developments taking place at the growing young company which has grown from six employees to over two hundred now entering its third year of operations.

The Dublin Aerospace Chairman has vast wealth of experience in the aviation industry- Aer Lingus Commuter CEO, Director and Co-Founder of Air Asia and Director of Group Operations at Ryanair and is Managing Director at PlaneConsult. The experience and knowledge of these businesses enabled Conor to launch a new MRO Model Dublin Aerospace.

'Our Employee Model is everything to us'

The lecture was opened by Paul Gorey Chairman of the Royal Aeronautical Society with the opening statement ‘We are getting the industry back on its feet’ which set the tone for the lecture, which was followed by the Head of APU Services Fergus Woods showing three videos of the three business unit’s APU Services, Base Maintenance and Landing Gear Services to give an insight into the business.

The closure of SR Technics enabled Dublin Aerospace to start-up without the legacy structure of its predecessors on the site, with Conor McCarthy assembling a group of investors to raise $25 million to set-up the new business.

The employment model is unique in the MRO business in that company deals directly with its employees and on the first day of employee staff receive a letter stating the competitive nature of the global business. The Labour model is based on that of Low-Cost carriers focused on efficiency, productivity and safety with a strong customer focus, employees are incentivised through a 20% profit share scheme each quarter.

'It is your business-Take responsibility'

Dublin Aerospace broken the model of its legacy prodcessors by focusing on a narrow product line thus reflecting the low-cost business model. The company focuses on Base Maintenance in the Airbus A320 Family and Boeing 737 Classic and Next Generation and in business units APU and Landing Service Centres


The Dublin Aerospace Model it’s a three legged stool-APU , Base Maintenance and Landing Services, as each unit helps to cross-sell products. In start-up phase having the three units operational was really important, to enable sales and product focus to develop competences, capability and sell man-hours.

'Team Leaders are like captains in a sports team'

The three business units (APU, Base Maintenance and Landing Gear) are run by a team leaders who are responsible for the Profit & Loss (P&L) and the team. The teams are thoroughly integrated with engineering, finance, marketing and planning and each pays it own overhead costs which ensure the centres are run as tight as possible.

Dublin Aerospace has ambitious plans for growth ahead in two years time when the Aer Lingus Base Maintenance contract comes up for renewal it will bid for the A330s to win the A320 family business contract.

The company plans to develop its relationship with the aircraft lessors with Ireland a leading centre in the business with the large concenration in the IFSC and Shannon.

The collapse of Spanair saw 14 Airbus A320/1's aircraft being ferried to Dublin for maintenance & care and short-term storage prior to a number of aircraft being re-delivered to Vueling Airlines by lessors. Dublin Aerospace collaborated with Eirtech Aviation who re-painted the aircraft prior to delivery to the customer. 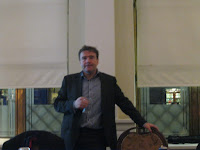 The company will work with it’s shareholders Airbus and Air Asia also in due course with potential Global footprint/Joint-Venture partners to bring work to Dublin , and may in the medium term re-open the avoinic component repair shops if it can secure a high-volume of work, also the company plans more hangarage and it plans to keep its shape and cost base discipline.

An exciting future lies ahead for Dublin Aerospace having recently won new contracts from British Airways and Cebu Pacific. It's highly competitive cost base and unique employment model with highly productive workforce has set the foundations for future growth of the company , which will be a win-win for it's customers, employees, shareholders and Ireland Inc.