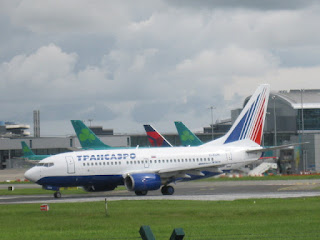 The first aircraft HA-LOI Boeing 737-7Q8 c/n 29350 arrived in Dublin around 2130 operating the scheduled service MAH622 from Budapest on 2nd of February, however it was unable to depart on the morning of the 3rd of February as the carrier ceased operations at 0500GMT.  The aircraft was subsequently registered EI-EUW to ILFC Ireland Ltd on the 3rd of March and was delivered to Vilinus on lease to Transaero Airlines on the 20th of June (Planespotters.net). 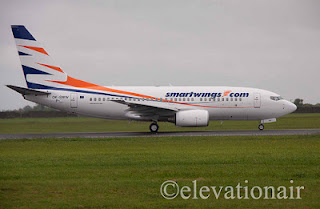 The second aircraft HA-LOA Boeing 737-7Q8 c/n 28254 was ferried Tel Aviv to Dublin on the 10th of March 2012 it had been undergoing maintenance in Tel Aviv at the time the carrier ceased operations.  The flight to Dublin was the last time a Malev Airlines aircraft would fly in full colours with Hungarian registration.

On the 23rd of April HA-LOA took up a temporary registration EI-EUU before becoming OK-SWW with Smartwings. The aircraft was delivered Dublin to Prague on the 3rd of June as TVS737 becoming airborne at 1255 local off Runway 10 (Planespotters.net).