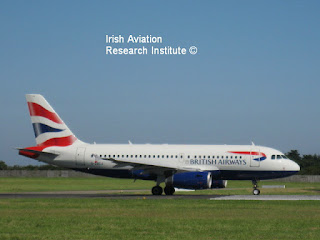 British Airways resumed operations on the London Heathrow-Dublin route after an absence of 21 years on the 26th June 2012 following the acquistion of BMI Airlines by the International Airlines Group (IAG) has announced that it is double frequency on the route from four to eight daily flights including a new early morning 0625 departure from Dublin Airport appealing to business and leisure passengers with the introduction of the new winter schedule effective 28th October.

British Airways will basing an Airbus A319 in Dublin with the introduction of the winter schedule and expects to carry 600,000 passengers on the London Heathrow-Dublin route with routes to Cape Town, Hong Kong and US very popular for flight connections (Irish Times 16th August).

The airline will be using Airbus A319s on the London Heathrow-Dublin route in a two class configuration Club Europe & Economy with complimentary food and drinks on-board. It's all inclusive fares which include a generous 23kg baggage allowance, free online check-in & seat selection 24 hours prior to departure.

The British Airways Sales Manager Ireland Simon Daly stated "I am delighted to see the British Airways colours back in Dublin after an absence of 20 years. We appreciate the importance of air links to London and are pleased to announce that less than two months after taking over this route, we are now able to respond to customer demand and increase capacity".

British Airways makes a significant contribution to the economy through daily overflights generating en-route Air Traffic Control charges for the Irish Aviation Authority (IAA) and BMI Airlines being integrated into British Airways has a contract with Shannon Aerospace (SAL) for Heavy Base Maintenance Checks on it's fleet of 25 Airbus A320 Family aircraft up to January 2014.  In April an British Airways Airbus A319 visited Dublin Aerospace for a maintenance check.

Posted by Irish Aviation Research at 12:34 No comments: Links to this post