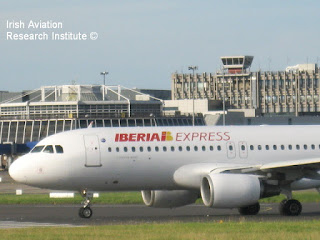 Iberia Express (I2/IBS) the new low-cost unit of International Consolidated Airlines based in Madrid to provide lower cost  feed to Iberia Airlines route network, has already acheived a 30% reduction in unit cost improvement and is profitable. On 13th August announced it carried 1 million passengers on over 7,000 flights  five months after commencing operations on 26th March 2012. The airline operates 17 routes from it's Madrid Hub including 12 domestic routes and 5 international routes operating 11 Airbus A320s in a 177 seat layout configuration with 500 staff, ranks in top five carriers at Madrid in terms of passenger volume. The airline plans to increase the fleet to 40 units by 2015. The Iberia Express CEO Luis Gallego stated "Dublin is the first of six European destinations that Iberia Express has in its summer programme". Iberia Express operates the Dublin route 8 times weekly at present using Termin
Post a Comment
Read more 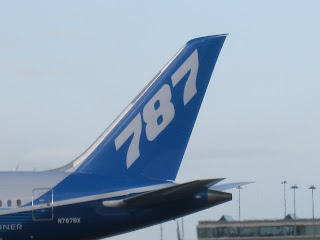 Irish Aviation Research Institute © Their is a real prospect that Shannon Airport could become a future Boeing 787 MRO Hub as Shannon Aerospace has identified the type to be added to it's product line at a later date. Across the runway Transaero Airlines is considering it's options with Boeing for the maintenance of four Boeing 787s on order, which are to be delivered from 2014 with the existing Transaero Engineering Ireland Ltd facility one option to maintain the fleet with the opportunity for third party work ( Irish Times 30th April 2012 ). The development of Boeing 787 MRO capability in Ireland is line with the government strategy of moving up the supply chain with higher value activities and to develop Shannon Airport as an aviation center of excellence. The Boeing company has 859 firm order for the Boeing 787 from 59 customers with 16 aircraft delivered to date in an increasingly competitive and high fuel cost envrionment the Boeing 787 will become a competitiv
1 comment
Read more

On 25th July Ryanair held a Warsaw Modlin Airport press conference to celebrate it's first week of operations at the new airport announcing it carried 12,000 passengers on eight routes on more than 70 flights. To celebrate the airline announced a seat sale from Warsaw Modlin with lead in fares 50% cheaper than it's rival Wizzair. At the press conference it's rival Wizzair sent a representative to present the Ryanair CEO Michael O'Leary a free ticket on any of it's 20 routes from Warsaw Modlin as part of it's Pink Day promotion as the press conference was underway. As usual the Ryanair CEO Michael O'Leary never let's a good PR opportunity pass him by turning the Wizzair rep's presence to his advantage as can been seen on the video!!!. Ryanair operate Dublin to Warsaw Modlin three times weekly on Wednesday, Friday and Sunday increasing to five times weekly from September and to daily frequency effective 28th October.
Post a Comment
Read more
More posts