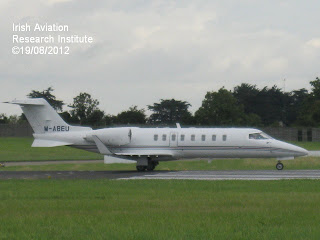 Ryanair has acquired a Learjet 45 c/n 45-368 ex VP-BSF which was delivered on 26th January 2012. The aircraft is registered in the Isle of Man to Aviation Leasing (IOM) and based in London Stansted is operated under the call-sign "Ryanair 01".

Ryanair use the aircraft as a cost-effective tool for AOG support & crew positioning as and when required across it's European route network, thus enabling the airline to recovery it's schedule. The aircraft first visited Dublin Airport on 22nd June and has since made subsequent visits. Their has been no reports of the aircraft visiting other Irish Airports to date served by Ryanair.


Posted by Irish Aviation Research at 10:34 No comments: Links to this post