On Monday 20th Feburary it was announced that Cityjet was named official airline partner of Paralympics Ireland, which will see the carrier providing flights for the Irish Paralympic team and management before, during and after the London 2012 Paralympic Games. The airline has applied Paralympics Ireland’s logo to EI-WXA British Aerospace Avro RJ-85.


The Cityjet CEO Christine Ourmières said "As an Irish airline, we’re proud to be able to carry the official Paralympic team to the Games. To show our pride and enthusiasm, we’ve dedicated one of our aircraft in their honour, and we hope that between now and the Games, all of our passengers will see, and join in support of the Irish team.” (Cityjet 20th February 2012).

Posted by Irish Aviation Research at 15:02 No comments: Links to this post 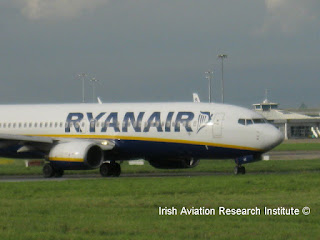 The Danish Travel website Check-In.dk (22nd August) reported that Ryanair has handed back slots for 34 routes to Copenhagen Airport for 215 weekly flights from the 28th October which would have seen the airline base eight aircraft in CPH.  The news will no doubt be a relief to existing operators at CPH.

The Ryanair CEO Michael O'Leary on the annoucement of Q1 Results said " We continue to see significant opportunities to grow across Europe as many airports aggressively compete to attract Ryanair's traffic growth" (Ryanair 30th July 2012).

Posted by Irish Aviation Research at 11:24 No comments: Links to this post