Joe Walsh Tours as the official tour operator for Leinster Rugby will be operating private charter flights with Cityjet to Heineken Cup and RaboDirect PRO12 competitions this season commencing 14th September with first game between Leinster and Benetton Treviso.

On 17th May Cityjet rolled out EI-RJX RJ85 c/n E2372 ex N536XJ in the colors of Leinster Rugby with the aircraft painted by Eirtech Aviation Ltd. The aircraft was offically unveiled at a function at Cityjet Hangar Dublin Airport on 18th May, the Bank of Ireland and Cityjet are the official partners of Leinster Rugby. Cityjet signed a 3 year contract to sponsor Leinster Rugby in September 2010.

The painting consists of a Basecoat containing the pigment, with a Clearcoat that is a clear varnish. This new technology paint provides weight saving, more longevity as well as a shiny ‘wet look.’ The paint is 75 microns thick (0.075mm) and has a total weight of 75 kg on the RJ85. This is approximately 30 kg lighter than previous technology, helping the aircraft to be more fuel efficient.

Ryanair launched it's new APP for iPhone and iPads which is available for download on  iTunes store for €3 and shortly for Android smartphones. The Ryanair CEO Michael O'Leary said "If people want the app, they can pay for it".

The APP enables passengers to book and manage flights including checked-in bags and priority boarding , to view timetables , latest news and promotions and book car hire with Hertz. It is expected the APP will be updated in due course to enable passengers to board aircraft using the electronic boarding pass capability.
.
The Ryanair CEO Michael O'Leary said "Ryanair is pleased to launch our latest passenger initiative (the iPhone/iPad app) which will allow passengers to book Europe’s lowest fares, manage their booking, and keep up-to-date with Ryanair news, directly from their iPhone or iPad. Passengers can now book Ryanair flights anywhere they take their phone, day or night, ensuring that they never miss out on our lowest fares". 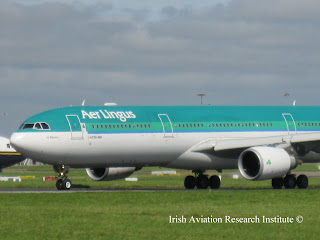 EI-ELA Airbus A330-301 c/n 1106 Aer Lingus operated both sectors from and to Washington Dulles as the EIN7118 on Thursday 30th August and the return leg EIN7119 on Sunday 2nd September.

Aer Lingus, in support of The Gathering, will host, ‘The Aer Lingus Gathering Hurling Tournament’ which promises to be a significant sporting event on the Irish calendar in September 2013.

Aer Lingus is working closely with Tourism Ireland to help promote the Gathering initiative and to encourage the global Irish community to return to Ireland for many of the planned events. The airline will offer special promotional fares to and from Ireland for those travelling to the series of events in 2013.

Aer Lingus CEO Christoph Mueller said "We are very proud to support 'The Gathering' initiative. We are confident that the Aer Lingus hurling tournament will help to foster an interest in one of our most loved national sports, which is an integral part of our rich Irish heritage. This is just one of a number of initiatives and events that Aer  Lingus will be involved with in 2013. We look forward to welcoming many of the Irish Diaspora home to Ireland for what promises to be an exciting year.”