On Wednesday a privately owned VP-CAL Boeing 777-200LR , having taken off from Basel in Switzerland flew over England, over to Norway, across to the Faeroe Islands, back across Scotland, down over Ireland, did a number of circles over Wexford (to get a good view of National Ploughing Championships?), then headed down over the Bay of Biscay and across France to land again back in Basel. It cruised at 39,000 feet (FL390).

The aircraft generated a discussion on the Irish Aviation Spotters Yahoo Group given it's unusual routing and timing with west bound traffic flows into the North Atlantic Oceanic Airspace. The aircraft first flew on 23rd August 2010 and was ferried Paine Field to Basel 4th November 2010.


Posted by Irish Aviation Research at 17:24 No comments: 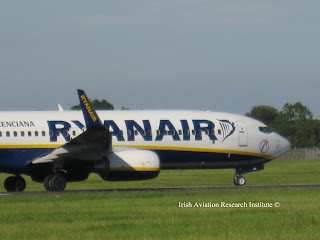 Ryanair has begun the final phase of its aircraft delivery programme as the first four out of eleven outstanding Boeing 737-800s on order have been delivered, with remaining deliveries to completed by the end of March 2013 bringing it's fleet to 305 aircraft. Ryanair took delivery of it's first Boeing 737-800 on 23rd March 1999.

The airline is the world's largest Boeing 737-800 operator with 297 in service (70 options outstanding) with an average age of 3.8 years, operating from 51 bases across Europe. Ryanair CEO Michael O'Leary has indicated the carrier could purchase between 100 and 400 new aircraft for expansion and fleet replacement, given their fleet size they have the economies of scale to operate a dual fleet.

Ryanair CEO Michael O'Leary in a recent Flightglobal interview said 'We are in ongoing discussions with Boeing and as soon as we can reach an agreement on price we'll place an order. It could be the -800 or the Max, whichever they discount the most - we'd buy a dog if it was cheap enough we'd like to place an order, but only when the price is right'  (4th September).

Posted by Irish Aviation Research at 09:17 No comments: