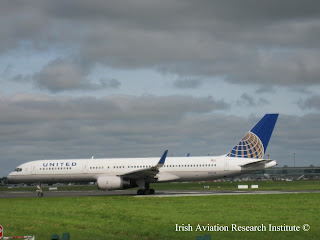 United Airlines has announced that it will launch a new five-times-weekly service between Shannon and Chicago from 7th June to 27th August 2013 (both dates westbound), subject to government approval, the new route is expected to generate 20,000 passengers at Shannon Airport. The Shannon-Chicago flight, UA67, will depart Shannon daily except Wednesday and Thursday at 1100, arriving in Chicago 1305.  The return flight, UA66, will depart Chicago daily except Tuesday and Wednesday at 1800 arriving in Shannon at 0730 the next morning. The flights will be operated by Boeing 757-200ER aircraft with a total of 169 seats – 16 flat-bed seats in United BusinessFirst and 153 in United Economy, including 45 Economy Plus seats with added legroom and increased personal space. The flight is scheduled to provide connections beyond Chicago to over 125 destinations across North, Central and South America and the Caribbean. Mayor of Limerick
Post a Comment
Read more

Cityjet CEO Christine Ourmières has been elected by members onto the Board of the European Regions Airline Association (ERA).  Christine is only the second female Airline President to be elected to the ERA Board in the Association's 32-year history. Cityjet was awarded the Second Silver Award from EGNOS, the European Geostationary Navigation Overlay Service at ERA 2012 Conference in Dublin. Cityjet CEO Christine Ourmières said the company was currently installing EGNOS systems on eight of their 13 Fokker 50 propeller aircraft. “We are jumping to EGNOS for reasons of cost and improved navigation,” she said. “We did some analyses and found fuel savings, and comfort for our crew – they feel better, safer, and it is a modern tool.” CityJet, is a subsidiary of Air France-KLM. Ourmières said it essentially extended the viability of the fleet. “You are always asking whether or not the fleet is too old. With EGNOS, even with a 25-year old aircraft, you know that the technology is good,
Post a Comment
Read more
More posts