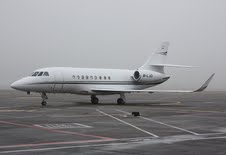 Courtesy Paul Daly  Former Dublin based Ven Air Falcon 2000LX M-LJGI c/n 143 has been to the United States.  The aircraft was registered as N806DB on 22nd April 2013 to DB Service company LLC in Colorado. M-LJGI is a 2007 build airframe and in 2009 the aircraft had blended winglets fitted, making it one the few Falcon 2000 aircraft which have undergone the modification. The aircraft has been replaced by a new Falcon 7X carrying the same registration M-LJGI was delivered to Dublin Airport on Friday 24th May arriving at 2040. Irish Aviation Research Institute © 29th May 2013 All Rights Reserved.
Post a Comment
Read more
More posts