A Record Year For Transatlantic Traffic At Dublin Airport


Dublin Airport will set a new record this year with more than 1.8 million passengers expected to travel on flights between North America and Dublin during 2013. This year already almost 1.3 million transatlantic passengers have travelled through Dublin, which is a 14% increase on the same period in 2012.

This summer, Dublin Airport had 224 flights to and from North America every week, which is the equivalent of 32 flights per day. Dublin Airport is also benefiting from an increase in transfer business to the United States and Canada, as passengers from Britain and continental Europe are choosing to travel to North America via Dublin

Dublin Airport Authority’s Strategy Director Vincent Harrison said "Transatlantic traffic is growing rapidly at Dublin Airport and the previous record for passenger numbers travelling to the United States and Canada will be comfortably exceeded this year.

This transfer business is very welcome, as a steady supply of transfer passengers underpins the viability of existing long-haul services and also encourages airlines to launch new services and extra frequencies from Dublin. We have a large increase in capacity this year with available seat numbers expanding due to; a new service to JFK from American Airlines, increased frequency on Boston and Chicago with Aer Lingus, a larger aircraft on the US Airways’ service to Philadelphia, and the impact of a full year of United’s Washington DC service.

We’re also benefitting from The Gathering, which has given a major marketing push to Ireland in North America, and which also has been strongly supported by DAA".

The growth in transatlantic traffic at Dublin Airport is likely to continue next year, as the pipeline for new North American routes is already strong. “Aer Lingus will have new services to San Francisco and Toronto, and Air Canada Rouge will also be launching a new year-round service to Toronto in 2014.”
Irish Aviation Research Institute © 6th September 2013 All Rights Reserved.
Posted by Irish Aviation Research at 21:02 No comments: Links to this post

This week Dublin Airport played host to a number of European regional carriers operating a series once-off charters , also a number of charters in connection with tonight's Ireland Vs Sweden International Football Match in the Aviva Stadium ,breaking the monotony of Aer Lingus and Ryanair whom dominate aircraft movements. 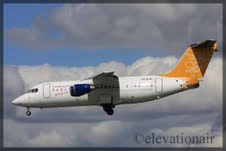 Malmo Aviation made a welcome return to Dublin for tonight's Swedish match with SE-DJR c/n 2392 for the Swedish match.

Posted by Irish Aviation Research at 20:32 No comments: Links to this post