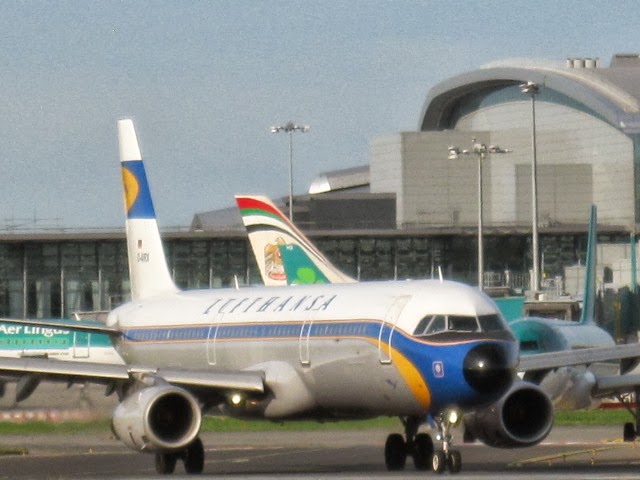 Dublin Airport  The Irish Aviation Authority announced an continued positive trend of commercial air traffic growth at Dublin Airport in September as commercial traffic increased by 6.6%. In the nine months of January to September traffic increased by 4.2% to 124,939 commercial movements compared to 119,867 for the same period in 2012. IAA CEO, Eamonn Brennan said “This sustained growth is very encouraging news for Dublin Airport and the wider economy. September was also a good month for Shannon, up 5.5% year-on-year. There is some way to go to catch-up with previous levels during the peak years but 2013 is a step in the right direction. In Dublin, the IAA is handling this growth phase both safely and cost effectively through our innovative and award winning airspace management technique known as Point Merge”. On a cumulative basis, commercial terminal traffic for Dublin, Cork and Shannon airports for January to September 2
1 comment
Read more

Courtesy: Paul Doyle  YU-APC Airbus A319-131 construction number 2621 hex code 4C01E2 Air Serbia was delivered from Dublin to Dusseldorf on Tuesday 8th October departing at 1815 hours for cabin configuration. The aircraft has been painted by Eirtech Aviation and underwent maintenance at Dublin Aerospace. The aircraft was previously VT-KFH when with Indian carrier Kingfisher Airlines arrived Dublin Airport 27th April 2013 for long term storage & maintenance from Istanbul. The aircraft is owned by BBAM Leasing/Fly Leasing. According to Airfleets.net this aircraft had its first test on 23rd November 2005 and delivered to Kingfisher Airlines on 1st December 2005 and was put into storage after Kingfisher Airlines ceased operations on 2nd October 2012. Air Serbia will be the national flag carrier airline of Serbia once it commences flight operations after receiving appropriate regulatory approval. It will replace Jat Airways,
Post a Comment
Read more
More posts