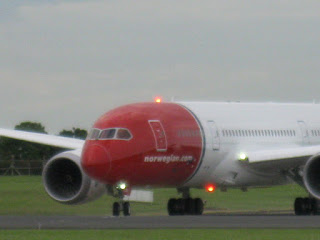 The aircraft are currently registered to the airline's Irish subsidiary – Norwegian Air International (NAI) Ltd – under a 12-month exemption to expire on 16th June, ongoing delays to its US application for a foreign air carrier permit are forcing Norwegian to transfer eight Boeing 787s from Irish to home-country.

Norwegian was granted an Operating License and Air Operator’s Certificate (AOC) on 12th February 2014. It established operations in Dublin for several reasons including access to future traffic rights to and from the EU, Ireland was a Cape Town Convention signatory and Ireland ranked as one of the highest ranked civil aviation authorities in the world, and cluster of leasing companies and MRO companies.

The future of managerial and mandatory regulatory functions carried out in Dublin is unclear as 787's transfer, the company's 40 staff are based in Collinstown House, Dublin Airport, the company has been considering launching a direct service from Dublin to Bangkok.

In the first quarter of 2016, Norwegian will take delivery of two 787-9's on lease from MG Aviation, larger than the 787-8 that Norwegian currently operates on its long-haul routes, with commitments to grow fleet to 17 aircraft by 2018.