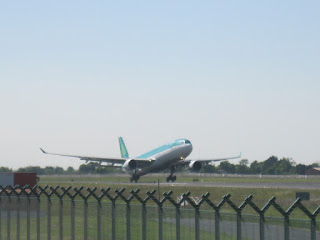 Aer Lingus Airbus A330-300 Today marks a milestone of 21st anniversary of the transformation of Aer Lingus North Atlantic services as on this day it began Airbus A330-301 daily separate Dublin and Shannon services to New York JFK. Aer Lingus was first operator to inaugurate ETOPS (Extended Range performance twin-engine operations) operations over the North Atlantic with this model. The Airbus A330-300 was formally launched by Airbus on 5 June, 1987, and flew for the first time more than five years later on November 2, 1992, powered by two GE engines. The first Rolls-Royce Trent 700-powered A330-300 first flew on January 31, 1994. The A330 was one of the first airliners to be designed entirely by computer aided design (CAD), European and US type certification for both types, powered by GE CF6-80E1 engines, was obtained also simultaneously on October 21, 1993.The A330-300  first delivery to launch customer Air Inter occurred i
Post a Comment
Read more
More posts