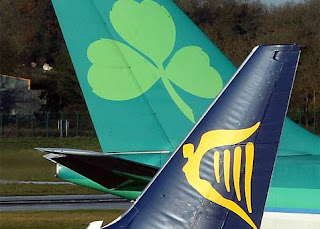 I read with interest "Dogfight in the skies: the two men changing the face of aviation" published by Irish Independent on Saturday 26th July.  I disagree with many of the points raised, as IAG's imminent takeover of Aer Lingus far from diminishing competition is certain to raise competition bar increase connectivity which is a win-win for consumers. Competition keeps everybody on their toes and innovate.

The Irish government's aviation policy is enabling competition to flurish through it's Open Skies agreements and fifth freedom rights, gone are days of the only route to Canada was over London Heathrow and summer peak only services, now Dublin has year-round service to Toronto with Aer Lingus and Air Canada Rouge, additional new destinations have opened up to Halifax and St John's.

Icelandic low fare carrier Wow Air introduced a new route between Dublin and Reykjavik on 2nd June, carrying 3,300 passengers in first month of operation with a load factor of 81pc with many passengers connecting onward's to Boston and Washington Dulles.

As the North American market is dominated by airline alliances controlling 83% of total market share, intra alliance rivalry will intensify as they fight for greater market share. Major Low cost carriers have been hindered from entering this lucrative market due to ongoing regulatory issues and pricing in the current aircraft cycle is not yet attractive enough for an off-shot of an existing low fare carrier to enter the fray.

The Irish government made the right decision to sell it's 25.1 per cent to IAG as Europe's airline industry continues to consolidate and evolve among five big carriers Air France-KLM, Easyjet, IAG, Lufthansa, and Ryanair competition will intensify as they battle for a larger share of Europe's market.

The Irish consumer will get a taste of growing rivalry this winter as Aer Lingus reinstates it's Liverpool service taking on Ryanair in it's own backyard and as Ryanair considerably increases frequencies from Dublin to Barcelona and Madrid taking on Aer Lingus and IAG carrier's Vueling and Iberia Express respectively.