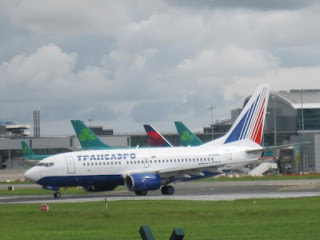 EI-EUW Boeing 737-7Q8 Transaero Airlines Russian's second largest carrier Transaero announced on 2nd October it has stopped selling tickets and has set its final day of operations on December 15, according to a statement published in its Facebook page . “Upon the decision of the Government to reorganize the activities of Transaero, and to ensure the transportation of our passengers, the sales of tickets for our flights has been stopped.” Said the airline. “The transportation of passengers with issued tickets for our domestic and international routes will be up to December 15, 2015. Tickets issued for flights after this date will be fully refunded.” Transaero has 104 aircraft (only nine are directly owned) Boeing 777, 767 and 737s, with the remainder on financial or operating leases from an number of Irish aircraft lessors. Friday last a brand new Airbus A321 owned by Dublin based ICBC Leasing was delivered from Hamburg into s
Post a Comment
Read more
More posts