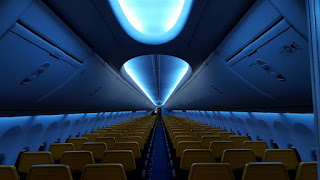 Image of Ryanair Sky Interior  courtesy  of Adam Kasza Irish budget Ryanair this week received a record six brand new Boeing 737-800's becoming the largest number delivered in a single week to the carrier under the terms of it's 2013 Boeing Contract to purchase the 183 new Boeing 737-800 over a five year period from fiscal 2015 to 2019 bringing it's fleet to 326 737-800 aircraft. The transaction value of these six brand new 737-800s is $488.4 million based on Ryanair's 2015 annual report listing each aircraft at $78.5 million plus $2.9 million for buyer furnished equipment. All new aircraft deliveries are fitted with new slime-line seats and Boeing Sky Interior offering bins that pivot up and out of the way, sculpted sidewalls and LED lighting in the cabin to give the appearance of a soft blue sky overhead as part of a series of initiatives rolled out in "Always Getting Better" programme. EI-FOC R
Post a Comment
Read more
More posts