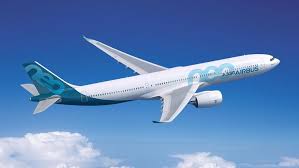 Airbus A330-300Neo Acumen Aviation Appoints Marco Claluna As Associate Vice President – Valuation Acumen Aviation announced the appointment of Mr. Marco Claluna as Associate Vice President – Valuation. Marco has joined Acumen’s Dublin Office and he will be a part of Acumen’s global team. He will continue to be based in Switzerland, with twenty years of experience, and commenced his career as Airframe and Engine Engineer at Jet Aviation AG, Kloten. AerCap Delivers its First Airbus A320NEO Aircraft, on Lease to Volaris AerCap Holdings N.V. announced the delivery of its first Airbus A320neo on lease to Volaris, making the airline the first carrier in North America to operate the aircraft type. This is the first of 10 A320neo aircraft to deliver to Volaris by AerCap, with a further 6 A321neo aircraft on order, delivering through 2018. Aircastle Delivers Airbus A330-200 to Aerolíneas Argentinas Aircastle Limited announced it
Post a Comment
Read more
More posts