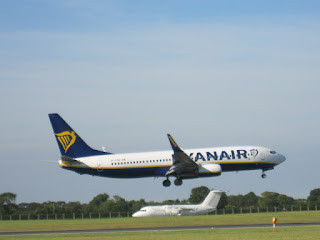 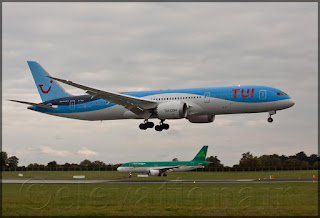 G-TUIJ pictured above landing Runway 10 credit to @elevationair. G-TUIJ Thomson Airways yesterday morning made an unscheduled stop in Dublin en-route from Cancun, Mexico and Boston to London Gatwick operating TOM62 becoming the first Boeing 787-9 Dreamliner to visit Dublin Airport due to Hurricane Matthew. Interestingly this  aircraft is painted in the new TUI livery to advance of re-brand this winter. The 787-9 is six metres longer than the 787-8 seating 290 passengers in a two class layout with range of 7,635 nautical miles (14,140 km) with the same 20 percent better fuel and emissions allowing airlines to grow routes first opened by the 787-8. Thomson plans to take delivery of up to four 787-9 Dreamliners before June 2019. This Summer Thomson Airways launched a new charter programme from Dublin to Cancun and Montego Bay for in-house brands Falcon Holidays and Thomson operated by Boeing 787-8. The Boeing 787-9 Dreamliner
Post a Comment
Read more 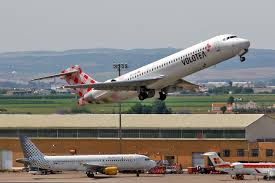 Volotea Boeing 717-200  On foot of the recent World Routes aviation event, which took place in China where a team from Cork Airport met with a number of airlines to discuss potential opportunities for the region. Volotea, the Spanish low cost carrier has announced it's first Irish service from Verona to Cork commencing in June 2017 operating weekly through the summer season until September.Volotea will fly a Boeing 717 on the route, adding 4,600 seats to the schedule of services next year. Aaron Mansworth, IHF Cork Branch Chairman said "This is great news for local tourism in Cork and Munster. The additional inbound visitors to the region will further boost the local economy. The addition of new routes at Cork Airport over the past 18 months has resulted in increased tourist numbers." Niall MacCarthy, Managing Director at Cork Airport said "We’re delighted to expand our choice of destinations with Volotea,
Post a Comment
Read more
More posts