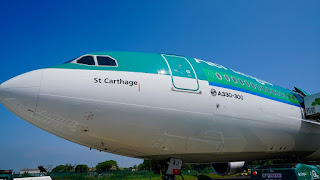 Image courtesy of Aer Lingus  Aer Lingus added a 11th Airbus A330 to it's growing North American fleet.  The new Airbus A330-302 aircraft, named Saint Carthage, registration EI-GAJ, was delivered Toulouse to Dublin on Tuesday 23 May as 'Shamrock 991' touching down at 2144 local. The aircraft has a total capacity of 313 seats, which is made up of 30 business class seats and 283 economy seats. EI-GAJ made its first commercial voyage on Wednesday 24 May as EIN109 from Dublin to New York JFK. The Airbus A330-300 has an average list price of $259.0 million according to the latest figures released by Airbus in January taking into account the materials and commodities prices. This summer Aer Lingus will operate it's largest ever transatlantic schedule flying to 11 North American destinations, with a total of 2.5 million transatlantic seats. The airline will increase frequency on Los Angeles service to a daily fli
Post a Comment
Read more 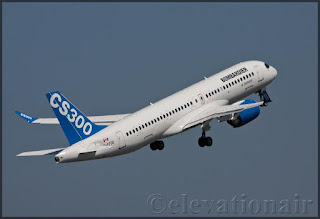 Bomabardier CSSeries 300 The fist visit to Dublin Airport of the new Bombardier CSeries CS300 aircraft took place on Wednesday 24 May when C-FFDO c/n 55002 callsign BBA508 operated from Montreal to Dublin as part of it's 120 minute ETOPS (Extended Twin Operations) certification process.  The aircraft returned to Montreal the next day. The Bombardier CSeries CS300 aircraft C-FFDK CS300 c/n 55001 visited Belfast City in July 2015 to celebrate Northern Ireland’s contribution to the success of the C Series programme at Bombardier’s wing facility. Bombardier has made investment of £520 million in Belfast on the research, design, manufacture and assembly of the C Series aircraft wings in it's purpose-built 600,000 square feet facility using innovative carbon-fibre composite technology, enabling both material and aircraft weight savings, contributing significantly to the C Series airliner’s game-changing economic and environme
Post a Comment
Read more
More posts