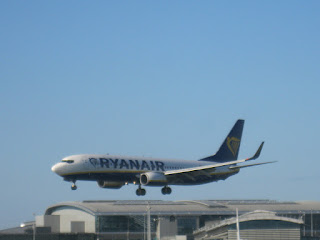 Ryanair Boeing 737-8AS  Ryanair Polish charter airline subsidiary, Ryanair Sun, headquartered in Warsaw confirmed it will launch with four operational bases in Poland with five Boeing 737-800s ; 2 in Warsaw, and in Katowice, Poznan and Wroclaw 1 Boeing 737-800 each . The inaugural flight is to take place on 26 April from Poznań to Zakynthos. In the first season of operations, Ryanair Sun will provide charter services for two travel agencies; TUI and Poznan's Grecos Holidays. The carrier plans to operate five Boeing 737-800 aircraft in 2018 increasing to 15 in 2019 and 25 in 2020. The carrier's first aircraft SP-RSA Boeing 737-8AS construction 44686 Ryanair Sun positioned Wroclaw to Warsaw Modlin on 29 March ex EI-FEE according to aviation sources. In Poznan and Wroclaw, the carrier will use the infrastructure of already existing bases, while in Katowice and Warsaw new ones will be established. In the winter season th
Post a Comment
Read more
More posts