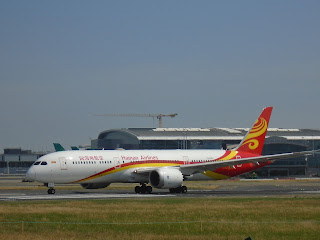 Hanian Airlines Boeing 787-9 Dreamliner  Over 100 Boeing 787 Dreamliner aircraft have visited Dublin Airport according to Dublin Movements blog. The 100th Boeing 787 visit went to Hanian Airlines with B-1546 a 787-9 on Saturday 14 July. Boeing has 1,387 orders for the Boeing 787 with 716 delivered and 671 unfiled as of the end of July. Irish aircraft lessors AerCap, Avolon, GECAS have taken delivery of the aircraft and Norwegian Air International had eight Boeing 787-8 on Irish register from year 2015 to 2017. In 2012 Etihad Airways announced Dublin as one of the first routes for operation for Boeing 787-9 in 2014 however the type service never materialized to date as route is  served by Airbus A330-200 twice daily from January 2019 a daily Boeing 777-300ER service. Peter Baumgartner, Etihad Airways Chief Executive Officer recently said "The Dreamliner is fast becoming our flagship long-haul aircraft and as more join th
Post a Comment
Read more
More posts