Image courtesy of Boeing  According to industry sources Ryanair's first Boeing 737 MAX 200 'Gamechanger' aircraft due for delivery in March 2019 is to be registered as EI-HAT. The Boeing 737 MAX Production blog lists the aircraft as line number 312 and line number 7285. Boeing developed the 737 MAX 200 in response to the needs of the fast growing low-cost sector, which is forecasted to account for 35 percent of single-aisle airline capacity by 2033. Ryanair is the launch customer for 737 MAX 200 with an order placed for 100 in a contract valued at $11 billion at list prices plus 100 options placed in September 2014. At the Paris Air Show 2017 Ryanair placed an order for an additional 10 Boeing 737 MAX 200 increasing it's commitment to 110 firm orders and 100 options. In April Boeing and Ryanair finalized an order for 25 additional 737 MAX 200 aircraft increasing its commitment to 135 aircraft. The $3 billi
Post a Comment
Read more 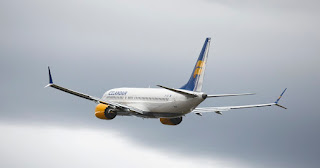 Image courtesy of Icelandair  Icelandair has introduced the Boeing 737 MAX 8 on Keflavik to Dublin route effective from Tuesday 16 October replacing Boeing 757-200 operating three times weekly on Tuesdays, Wednesdays and Thursdays with a fourth frequency to be added from 29 October day to be confirmed. The inaugural service was operated by TF-ICE c/n 44353 which was delivered  March 4 2018.  The aircraft is named "Jökullsárlón". Icelandair's new Boeing 737 MAX features 160 seats, of which 16 are in the Saga Business Class in a 2-2 layout and 144 in a 3-3 Economy Class configuration with Boeing Sky interior and customized LED lighting with larger overhead bins. Icelandair placed an order for 16 737 MAXs in 2013, including the MAX 8 and larger MAX 9 models for delivery between 2018 and 2022.The carrier is to introduce the 737 MAX 9 on Dublin 3 times weekly from October 2019 according to Airline Route presumably rep
Post a Comment
Read more
More posts