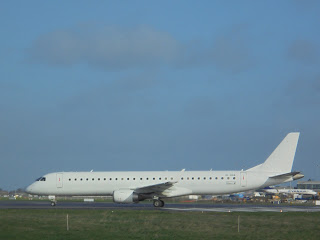 EI-GGA Embraer 195 Stobart Air  Stobart Air is one of Europe’s leading franchise, ACMI and charter aviation specialists has  opened a new Embraer 195 base at Dublin Airport with effect from start of IATA Summer season on 31 March. Stobart has based two aircraft to support operating up to eight flights per day on behalf of KLM Airlines, including Dublin to Amsterdam route. According to open source flight tracking website Flightradar24.com the Dublin based aircraft operates the first KLM service to Amsterdam KLM932 departing at 0555. Then usually operates a sector to Norwich and Oslo before returning back to Dublin KLM939 at 2235 hours. According to industry sources an second Embraer 195 will be based in Dublin to operate as an stand-by aircraft for KLM Airlines contract. EI-GGA Embraer 195LR MSN 19000184 and EI-GGB Embraer 195LR MSN 19000204 are both operated in all white colours. Irish Aviation Research Institute © 7 April
Post a Comment
Read more 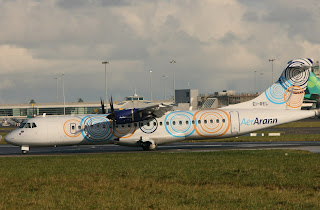 Image courtesy of Sean Flynn Stobart Air one of Europe’s leading franchise, ACMI and charter aviation specialists has retired the ATR72-500 aircraft from its fleet following the cessation of Flybe Isle of Man contract on 31 March where the carrier had been operating services to Birmingham and Manchester. Flybe brought the Isle of Man base in-house using its own DHC8-400 aircraft. According to John Dwyer NLSPOT List EI-REL MSN 748 operated it's last Flybe service on 16 March and was ferried to Monchengladbach , Germany on 17 March. It's sistershop EI-REM MSN 760 operated its last Flybe service on 30 March and was ferried to Monchengladbach on 31 March. Aer Arann the predecessor to Stobart Air placed an order for 10 ATR72-500 series in 2006 in a contract valued at over $180 million, is the single largest aircraft investment by a private Irish passenger airline and the third largest in Irish aviation history at the time.
Post a Comment
Read more
More posts