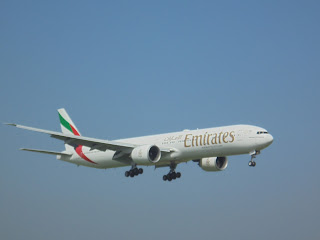 Emirates Airlines Boeing 777-300ER  Emirates Airlines is gearing up of reaching a major milestone of hitting 2.5 million passenger mark on the Dublin to Dubai route by December of this year. The airline commenced operations from Dublin in January 2012 with a single daily Airbus A330-200 service and has grown significantly now operating a twice daily Boeing 777-300ER service. The airline carries on average 22,000 passengers per month with a load factor of 85% with the most popular connecting routes are to Cape Town, Hong Kong, Johannesburg, Melbourne, Perth, Singapore and Sydney. According to Emirates demand is soaring for the Philippines and Vietnam. The Emirates Airlines Country Manager Enda Corneille speaking at media briefing said the Dublin route was punching above its weight with its 85% load factor above company average of 80% despite intense competition with 50 weekly frequencies east and south.  The carrier has hea
Post a Comment
Read more
More posts