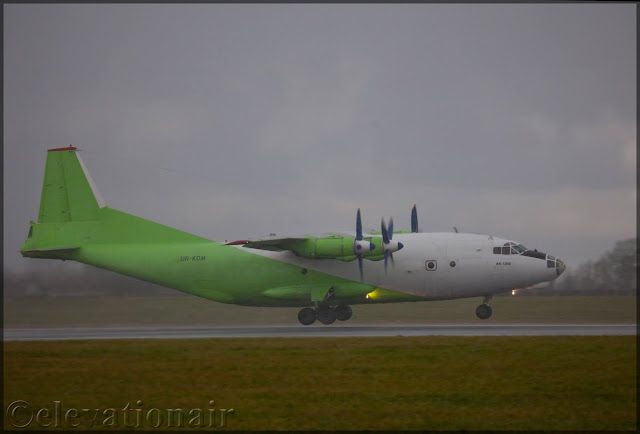 On Sunday 3th January UR-KDM Antonov An‑12BK msn 02348107 Cavok Air CVK7022 landed in Dublin at 1702 local from Luxembourg with a consignment of PPE stock. The next morning the aircraft to Leipzig Germany.

The aircraft has a very interesting history being almost 50 years old originally delivered to the Soviet Union - Air Force in 1972 and is powered by the Ivchenko AI-20  a Soviet turboprop engine developed by the Ivchenko design bureau in the 1950s. It has been built in large numbers, serving as the powerplant for the Antonov An-12 transport.

The An-12 was originally designed as a military transporter so can be used at remote cargo aprons within barbed wired military facilities and operate from concrete and unpaved runways, including grass landing strips. The aircraft has been modified and is fully EASA & Eurocontrol compliant with both EGPWS and TCAS systems has stage III noise level with a maximum payload of 20 tonnes and maximum range of 5,000km.

Cavok Air was established in 2011 based in Kyiv, Ukraine and started operations on 26 April 2012, following receipt of an Airline Operator's Certificate from the Ukraine CAA operating a fleet of 8 Antonov AN-12 aircraft.

EI-LRA Airbus A321LR image courtesy of Airbus  Irish carrier Aer Lingus part of International Airlines Group (IAG) plans to exploit Airbus A321LR North Atlantic growth opportunities, as outlined in IAG Full Year Results 2019 released on Friday 29 February during investor call.  The strategy was further enforced with the release of IAG 2019 Annual Report entitled "Leading Sustainable Aviation". International Airlines Group (IAG) CEO Willie Walsh in 2019 Annual Report described the introduction of the long-range version of the Airbus A321 as "A Game-Changer", adding "It allows Aer Lingus to target cities on the eastern side of North America where there is unlikely to be demand for a direct service with a larger aircraft" in reference to A330 platform. On investor conference call outgoing CEO Willie Walsh said "Aer Lingus has introduced the A321LR on the transatlantic, showing about a 22%, 23
Read more