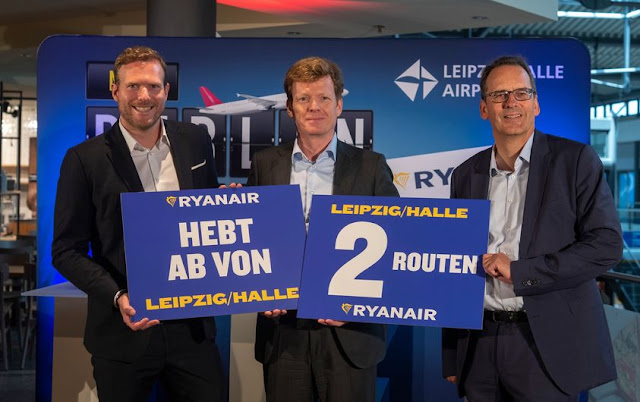 Irish budget carrier Ryanair announced plans to return to Leipzig/Halle Airport in central Germany after an absence of three years,  launching two new routes services to Leipzig/Halle, as part of its winter 2022/2023 schedule from it's Dublin and London Stansted bases , operating five weekly flights from the start of IATA Winter Scheduled on 31st October.

The carrier will operate Dublin to Leipzig/Halle twice weekly on Wednesday and Sunday effective from 2nd November.

Mitteldeutsche Flughafen AG CEO Götz Ahmelmann stated “We are looking forward to London and Dublin! The Central Germany region is growing dynamically and together with Ryanair we offer the fastest and most convenient connection to the British and Irish capital. The combination of short distances at the airport and a direct flight is a highly attractive offer that appeals to both individual and business travelers”.

Ryanair DAC Spokesman and Laudamotion CEO Andreas Gruber stated “As Europe's number one airline, Ryanair is delighted to resume operations from Leipzig/Halle Airport this winter with two exclusive routes from Dublin and London. They will help to make the central German region around Leipzig and Halle one one of the top cultural and tourist destinations in Europe, while giving people across the region more travel options to exciting European capitals.”

Mitteldeutsche Flughafen AG (MFAG), Wirtschaftsförderung Sachsen GmbH (WFS) and Investitions- und Marketinggesellschaft Sachsen-Anhalt mbH (IMG) recently signed an extensive cooperation agreement in order to strengthen the position of the “Leipzig/Halle Airport Region” in the long term. The aim of the agreement is to market “airea – the Airport Region in Central Germany” as a joint economic area across different federal states .

Leipzig/Halle Airport is located in Schkeuditz, Saxony, Germany and serves both Leipzig, Saxony, and Halle, Saxony-Anhalt. The Leipzig-Halle agglomeration is the geographic area around the two large cities of Leipzig and Halle (Saale) with a population of 1.2 million, located in the metropolitan region of Central Germany.